Preserving the past and keeping pace with the future – an old Stanwood Fire House is reinvented into a community focused brewery, bringing a world class beverage and dining experience with a respectful nod to the past. 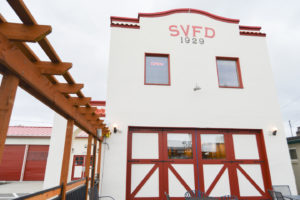 It was 1929, the start of The Great Depression,  and The City of Stanwood had suffered devastating house fires and were struggling to raise $2,500 for a larger, more equipped fire station.  Not wanting to financially burden the city, construction relied on volunteer businessmen and carpenters as well as fundraising efforts including a fireman’s ball.  In October of 1929, a celebratory banquet was held to reveal the new building – at 60 feet long and 22 feet wide the building was concrete on the lower section with an upper story of wood walls and stucco.  Furnished with sleeping quarters for two men, a large meeting room, kitchen facilities, and a lower floor to house trucks and pumping equipment. Inside was an 18 foot “slick brass sliding pole” and a handmade portable pump truck that took 500 hours to construct.  In 1954, the building was moved from Saratoga Street to allow for the expansion of Twin City Foods Company and relocated to its present location at the corner of 270th St. and 102nd Drive. A few years later in 1960 the twin cities of East Stanwood and West Stanwood consolidated and the fire department was moved to a new building in East Stanwood.  The historic fire house then was re-tasked as a municipal building, housing the City of Stanwood Public Works Department.

New life was infused into the historic building when it sold at auction to two firefighters in 2006 revitalizing the building into a brew pub with a firefighter theme and a pub grub menu.  The building is now home to Stanwood Artisan Ale and Lager (SAAL Brewing Company) and new owners Kristine Birkenkopf and Matt Stromberg have created an artisan experience, with local ingredients in both drinks and food, while preserving the rich historic experience the building provides.  SAAL (pronounced sale) has an extensive menu with multiple vegan and gluten free options, as well as plenty to satisfy the carnivores. Tip: don’t miss out on the candied bacon – seriously – with those two words how can you go wrong? Family and pet friendly (on the patio) the children will delight in the hand crafted sodas and visiting with the ceramic dalmation mascot named Blaze.  Reflective of the desire to stay local – you will find a wide array of local beer, wine, and cider from independent Washington establishments which rotate frequently. While you are feasting on delicious locally sourced cuisine take time to enjoy the history of the building – from the gleaming brass sliding pole to the sign under the bar – give thanks to the efforts of the community and the firefighters from 1929.

Article abridged from “To preserve or not to preserve—