Whale Of A Tale 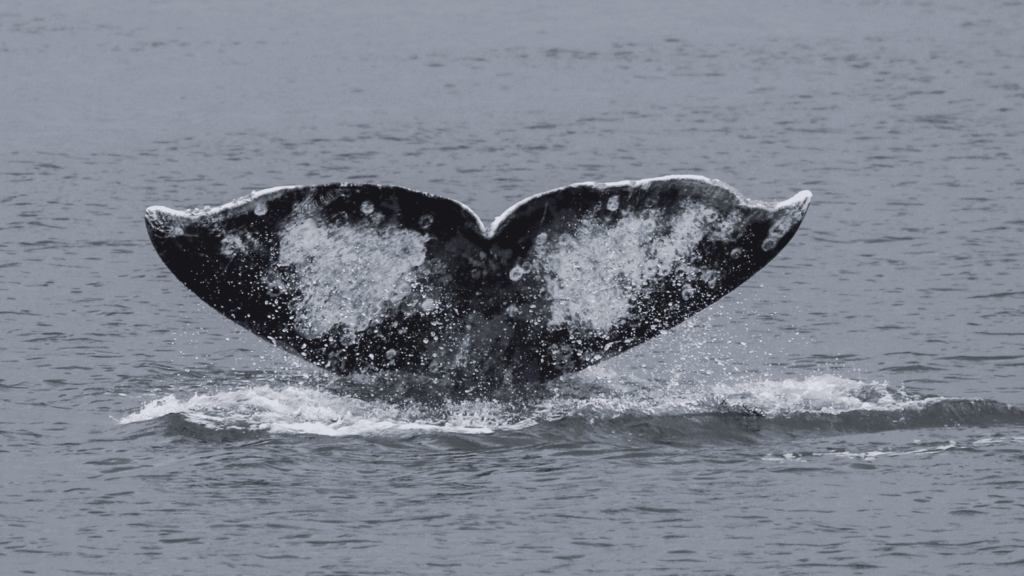 Whale of a Tale. The Story of two adventurous whales…

Once Upon a Time, there were two adventurous gray whales who decided to take a detour on their long migration route from Baja to Alaska to explore the Puget Sound. What they found was an abundance of ghost shrimp (a whale delicacy) so in 1990 the annual tradition of the “Puget Sounders” visit to Port Susan and the Saratoga Passage began…

Scientists believe the two gray whales now named Earhart and Shackleton (named after Amelia Earhart, the female airplane pilot and Ernest Shackleton, the famous polar explorer) were searching for an alternate food source, which they happened to discover in our waters. Over 300 gray whales travel the 10,000-mileround-trip journey from the Baja calving lagoons to the Alaska feeding grounds and only an exclusive club of 12 know Earhart and Shackleton’s little secret. These visitors known as “Puget Sounders”, “Sounders” or “Saratoga Grays”can be found feeding on ghost shrimp around Camano Island from late February to early June.

If you have walked in the tidal zone on a local beach at low tide and your foot suddenly sinks in the sand, you can thank ghost shrimp for the somewhat unsettling experience! Reaching four inches in length, ghost s

hrimp have a pale white and pink shell with one pincer noticeably larger than the other. They burrow in the sand as they feed on detritus, helping keep our ocean floors healthy and clean. Ghost shrimp are not tasty to the human palette; the shrimp tend to be mushy with an unpleasant taste. Gray whales however, find them irresistible! Gray whales are filter feeders also known as baleen whales. Baleen is a filtration system inside a whale’s mouth. A baleen whale will open its mouth and take in water. As they push the water out, the baleen traps small particles of food inside the whale’s mouth. Gray whales are not only baleen whales, they are also the only known bottom feeding whale. Their Alaskan feeding grounds have an abundance of food in the ocean floor as do our ghost shrimp beaches and at high-tide the grays come in close to shore to feed. They either scrape the ocean floor with their mouth to pick up a mouthful of sand or, they plant their powerful pectoral fins in the sand and whip their giant bodies a

round in a circle to scoop up the sand containing ghost shrimp. Their baleen filtration locks the ghost shrimp inside their mouths and filters out the sand, resulting in a tasty treat.

At low tide you can see the massive feeding pits in the sand along the shore. This close to shore feeding is considered a high-risk behavior because the gray whales are in very shallow water and with changing tides they risk beaching themselves. The years a gray female is with a calf, she skips the ghost shrimp pit-stop and scientists believe it is because the females do not want to subject their calves to the risky feeding behavior. The rest of the time however, the “Sounders” have decided the risk is worth taking for the scrumptious shrimp. In 2018, a few “Sounders” decided to skip the rest of the trip to Alaska all-together and enjoyed feasting on ghost shrimp all summer long. Most joined the southern migration in October but one gray decided to winter in our waters; skipping the warm birthing lagoons altogether. Gray whales start their migration from the warm calving lagoons in Baja Mexico in late winter and journey north to the feeding grounds of the Bering and Chukchi Seas in Alaska. They have the longest known migration of any animal known on earth with one-way of their journey taking two or three months. The grays are considered slow and steady swimmers cruising along at an average speed of 5mph, but capable of reaching 11mph when in danger.

Boaters should be extra careful in our waters and keep a watchful eye out for these beautiful animals and other whale species. Running into a whale can cause serious risk to the animal and to the people on board the boat. Boaters should remember to keep a respectful distance of at least 100 feet from gray whales (and 200 feet for orcas). Gray whales get their name from their skin, which is slate gray and mottled white due to barnacles and barnacle and parasite scars. They have a double blowhole and their blow resembles a heart or a V-shape. They can reach lengths of 50 feet and weigh up to 30 tons. Gray whales don’t have an actual dorsal fin like most whales. Instead, they have a dorsal hump with six to 12 knuckles running down their back to their tail stock. They live for 55-70 years and many of the whales that showed up in the 90’s are still visiting our waters today.

Every gray whale has its own distinctive markings and these help scientists identify them. For example, one “Sounder” named “Patch” has been visiting our waters every year since 1991, received his moniker because of a large white patch on the right side of his back. The gray whale “Dubknuck” is so called because he has double knuckles behind his dorsal hump. Hunted to near extinction after the discovery of the birthing lagoons in the 1800s, the gray whale is now a protected species. Thankfully their population has made a remarkable recovery and their number worldwide is thought to be 26,000 strong. If you are walking along a local beach between late February to early June, listen for the distinctive “poof” of a whale blow. It is a magical experience to see these giants of the ocean swimming languidly by, or even engaging in some energetic feeding. You may even be lucky enough to catch them spyhopping, when they vertically stick their heads out of the water to take a look and listen. There is so much we can learn from watching and enjoying these magnificent mammals. We are thankful for Earhart and Shackleton, two exploratory gray whales that discovered our ghost shrimp and gave other grays a reason to visit us every year.